We invite to the panel discussion as a part of Equality May. 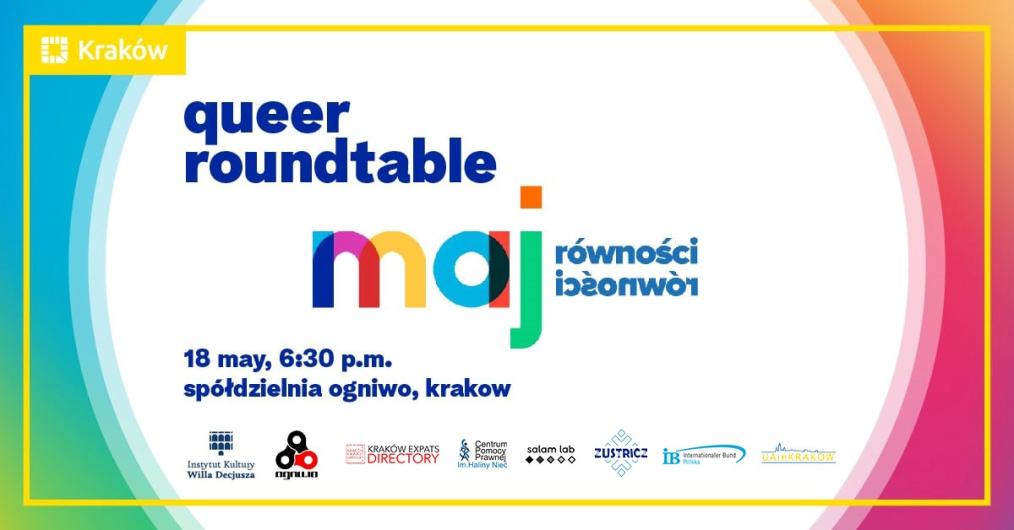 How is it that queer people of foreign origin can be intergrated in Polish society with the homophobia being rampant as it is? How are spaces created for queer people and how do they stay focused in prioritising queer people and queer issues? How is the intersection between queerness, nationality and migration operationalised in a polish context?
We are going to ask these questions during the panel discussion organized by Villa Decius Institute for Culture as a part of Equality May and hosted by Spółdzielnia Ogniwo, featuring Aaiún Nin, Magdalena Dropek, Karol Wilczyński and Serhii Chupryna.

The context of the discussion is Aaiún Nin’s debutante poetry collection, Broken Halves of a Milky Sun (Astra Publishing, New York 2022; recently released in Poland as Złamane połówki mlecznego słońca by Lokator), inspired by the experience of growing up and exploring a queer identity in postcolonial Angola.

The discussion will be in English. The audience is welcome to participate and ask questions.

Aaiún Nin, an Angolan poet, mixed media artist and activist. Through their work, they explore and confront issues of race, gender and sexual discrimination, as well as LGBT+ experience.
Nin’s poetry draws upon the experience of childhood and youth spent in a patriarchal society and is strongly rooted in the context of postcolonial Africa. In their poems they often refer to the present situation in Angola, addressing problems of sexual violence inflicted on women, religious fundamentalism and the contradictions of Catholic doctrine, social inequalities and racism. Since moving to Denmark in 2016, they have worked in collaboration with artists identifying with queer culture and have been an outspoken voice regarding the legal discrimination of immigrants and police violence in Scandinavian countries.
They currently live in Krakow, staying in Villa Decius as part of the ICORN Residency Program.

Magdalena Dropek studied Polish philology and journalism at the Jagiellonian University. For almost 10 years she’s been the editor of the largest and oldest website for LGBT people in Poland, Queer.pl, since 2012 she’s been involved in the organization of the Queer May festival and the Krakow Equality March. From 2013, a board member of the Równość.org.pl Foundation, which deals with strengthening the LGBT community and anti-discrimination activities in smaller cities in southern Poland. A member of the Equal Treatment Council appointed in May 2019 by the President of Krakow, Jacek Majchrowski. Since January 2020 she has been cooperating with the deputy office of Maciek Gdula (Lewica) in Krakow.

Karol Wilczyński, journalist, teacher and lecturer at the Jagiellonian University. He studies the issues of forced migration and Islamophobia, and also promotes global education and solutions for the integration of foreigners. He co-creates the Salam Lab platform educating on migration and human rights in Polish and supporting people in need. He has written reportages from Syria, Lebanon, Turkey, and recently - from the borderlands of Belarus, Lithuania and Poland.

Serhii Chupryna, a translator, educator and activist from Kiev, who has been living in Kraków for 8 years. Graduated from Jagiellonian University. A member of Jewish Community Centre, volunteering at the Mass Events Foundation (Fundacja Widowisk Masowych).
Tweet