In 2020 at Villa Decius we realised over 200 cultural projects. 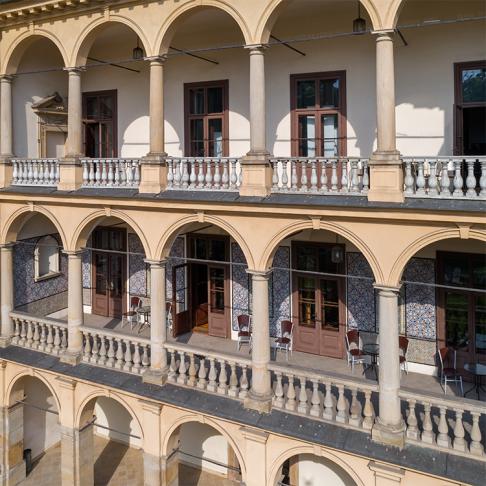 A summary of the most important events and projects that we were able to realise in 2020:

·       We inaugurated a new scholarship programme aimed at visual artists. In January, the French artist-photographer, Pierre Vallet, for the first time participated in the Artistic Scholarship of the Villa Decius Institute for Culture. We also organised an exhibition of his works in Villa Decius, and this year, together with the Austeria publishing house, we are preparing a "Book for writing": with photographs of the scholar taken during his stay in Krakow.

·       We started the Villa Artis Online series of musical miniatures, which can be viewed (and listened to) on our website and YouTube channel.

·       We begun work on a huge, multi-expert and multi-institutional project to create a postgraduate programme on "Cross-sectoral challenges: specialist for the protection of cultural heritage in case of crisis and war".

·       As part of our Villa Decius Institute for Culture publishing series, we published "The Return to the Mountains. A Diary in the Shadow of War" (translated by Marek Dziekan) - a book by Syrian writer Kholoud Charaf, who spent two years at Villa Decius on a scholarship as part of the ICORN programme.

·       We organised a multimedia word-image-sound exhibition FREEDOM inspired by the work of Syrian writer Kholoud Charaf, an ICORN scholar.

·       In cooperation with a number of cultural institutions, we organised a week-long festival of Ukrainian art and culture, Art Picnic.

·       We launched the online version of our flagship educational programme for schools, "Decius Ducats online", with 320 students from 22 schools participating.

·       Together with the Consulate General of the United States in Krakow, we prepared an outdoor exhibition in Krakow's Planty Park entitled "Polish Americans/American Poles".

·       We organised the Villa Decius Visegrad Heritage Lab - a series of online meetings and workshops with experts from the Visegrad countries on the challenges and ways of operating cultural institutions in times of pandemic.

·       In cooperation with a number of Krakow institutions and foreign consulates in Krakow, we organised a week-long Multicultural Festival - New Cracovians in a hybrid form.

·       In autumn, we began celebrating the 25th anniversary of the reconstruction of Villa Decius. On this occasion we prepared an outdoor exhibition in front of Villa Decius, entitled "500 years of the history of Villa Decius", and organised 3 wonderful classical music concerts - an outdoor concert in the courtyard of Villa Decius performed by Stanisław Sowiński and his ensemble and two concerts in the beautiful villa interiors performed by Capella Cracoviensis and the Polish Soloists.

·       We prepared a virtual photo exhibition "Belarus. A path towards freedom" available on our website.

·       We prepared the exhibition "Lace of Memory. In the memory of the victims of the Holodomor". On the anniversary of the Great Famine in Ukraine, large-format paper cut-outs by Daria Alyoshkin were displayed under the arcades of Villa Decius and in its interiors. There is also an interview with the artist on our website.

·       We organised a Round Table debate: ADDRESSING "LUCKY JEW" PHENOMENON.

·       In 2020, Villa Decius Institute for Culture became a member of the Europa Nostra association.

·       In 2020, Villa Decius Institute for Culture and the Jagiellonian University signed a cooperation agreement within the international Scholars at Risk (SAR) programme to organise the first in Poland stay of a refugee scientist. In December, we welcomed the first SAR scholar, Professor Candan Badem, to Villa Decius.

We want to express our GRATITUDE to all the institutions and partners who worked with us in 2020.
Tweet