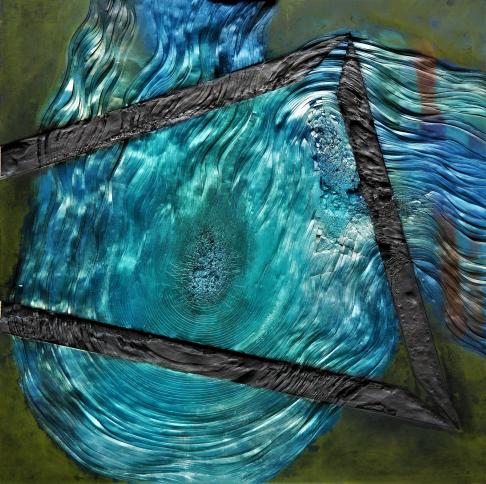 I know that Gała does not open wide the doors to the worlds he creates. At most, he leaves them ajar and allows me to look inside them through a narrow gap of suggestions, hints, glimpses, and the concoction of insights, hunches and guesses. Effectively deprived by Gała of certainty as to what it is that I am looking at, painstakingly but willingly, I extract from my imagination unfinished, fragmentary, and defective substitutes for understanding. Indeed, the works of this artist are real catalysts of imagination which, like the Large Hadron Collider—a machine located at the CERN European Laboratory for Particle Physics near Geneva—accelerate my imagination to inconceivable speeds and make its individual particles collide with one another, causing  a powerful explosion of fascination.
prof., dr hab. Andrzej Bednarczyk, Rector of the Academy of Fine Arts in Krakow, excerpt from the introduction to Dobiesław Gała's album "Reliefs"

Dobiesław Gała's album "Reliefs" is a kind of summary of his achievements in the field of drawing and sculpture. The work of Dobiesław Gała constitutes a new opening in Polish art. The artist, with solid workshop foundations, builds an artistic identity based on brilliantly presented structures, deformed by the interference of time. We will not see imitations and borrowings here. These are completely new forms. The artist brings them out using simple tools: graphite, carbon and an admixture of colors. Seemingly frozen structures emanate depth. The color used by Gała makes them exude their own strong energy. The longer we look at them, the more we feel, which is why it is impossible to remain indifferent to any of the works, which in many cases also form mutually complementary cycles.
It is not without reason that Dobiesław Gała chose the space of Villa Decius as the place for presenting his work - a place with over 500 years of history. The space of the historic palace inspires reflection on the transience, history and role of art, as well as engaging in dialogue with understanding the concept of time and heritage.

Locating contemporary art, especially non-figurative art, in utility buildings is a challenge for artists and curators. Villa Decius, whose design refers to the trends of the end of the 19th century, is an inspiring space, but also imposes a number of limitations; gives room for creative work, but somehow on its own terms. Therefore, the artist who presents his works here must be convinced of the value of this place, and at the same time remain open enough to inscribe himself in the history of its reinterpretation as a fragment of the material cultural heritage. It is not by accident that we offer the public an overview of the Author's works, for whom time and changes caused by its passage are the axes marking the creative field. The matter of the work changes and evolves here not only as a result of the artist's direct intervention, but also thanks to the use of active substances and chemical processes and, of course, with the passage of time. The author is not only "open to change", he even induces it thanks to his original technique. The works - especially the series created in recent years, and presented in this publication and in the rooms of Villa Decius - live their own lives from the moment they are completed by the Author, changing their structure and appearance over time. - says Dominika Kasprowicz, director of the Villa Decius Institute of Culture.

The publication of the album "Reliefs" will be accompanied by a presentation of selected works by Dobiesław Gała in the space of Villa Decius and artistic workshops conducted by the Artist, during which participants will learn about drawing tools and techniques from the times of Jost Decius to the 21st century.

Registration for the workshop:
https://willadecjusza.pl/en/events/drawing-workshop

Dobiesław Gała (1975), artist, sculptor, doctor of art, assistant professor at the Academy of Fine Arts in Kraków, Vice-Dean of the Sculpture Department of the Academy of Fine Arts in Kraków and a graduate of the Academy. In 2000 he obtained a diploma in the studio of Professor Marian Konieczny. He was awarded a scholarship from the Academy of Fine Arts in Nuremberg, where he worked under the supervision of the famous Tim Scott, and a scholarship from the Minister of Culture and National Heritage of the Republic of Poland. Laureate and winner of the Grand Prix of the X Triennial of Polish Contemporary Drawing and many prestigious awards for artistic creativity. He has presented his works at over 70 individual and collective exhibitions.